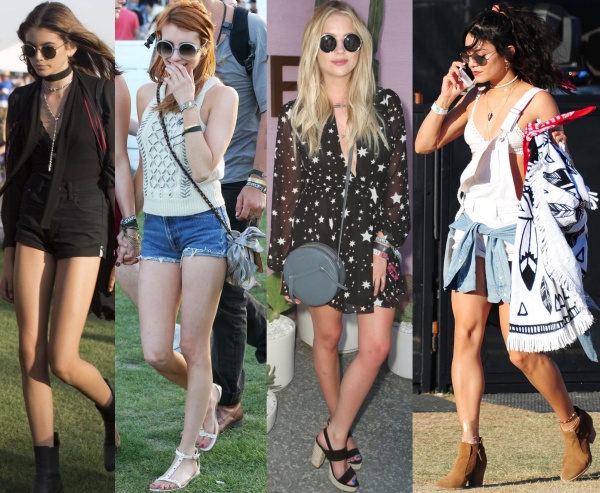 Coachella has come and gone, leaving a trail of outfit ideas and style inspirations for burgeoning fashionistas. Music festival season always delivers the coolest and most stylish ensembles from your favorite stars, and this year did not disappoint. The Coachella Valley Music and Arts Festival served a feast for the senses from frequent festival attendees such as Emma Roberts and Vanessa Hudgens, as well as stylish newcomer Kaia Gerber.

Check out some of the fabulously spotted looks from your favorite style stars at this year’s Coachella Valley Music and Arts Festival:

Kaia Gerber is following the footsteps of her supermodel mom, Cindy Crawford, with a number of fashion campaigns under her belt at only 14 years old. At this year’s Coachella, she was clad in an all-black ensemble, which exuded an effortlessly cool vibe that’s perfect for the event. She wore a kimono from Michelle Hebert over a Forever 21 top tucked into One Teaspoon shorts. Her dark locks cascaded freely down her back, and she accessorized with a scarf from Rockins, jewelry from Chrome Hearts, sunglasses from Ray-Ban, and boots from Alexander Wang.

Emma Roberts brought her casual-cool style to the festival. She wore an embellished knit vest paired with denim shorts from Levi’s. Her Coach crossbody bag was decorated with a Coach floral silk scarf, and she accessorized with an assortment of jewels from Jennifer Meyer. Emma finished off her look with round sunglasses from Jimmy Choo and a pair of Henriette t-strap sandals from Coach. 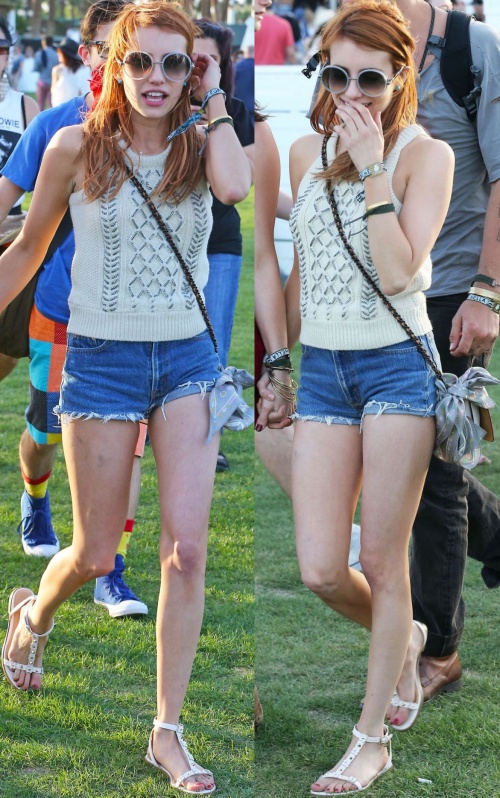 Ashley Benson stopped by the Revolve Desert House in a black Lovers + Friends SU2C x Revolve Lana dress with a star print and sheer long sleeves. She completed her look with round sunglasses from Perverse Madness, a round whale grey bag from Donatienne, and platform sandals from Raye Halle. 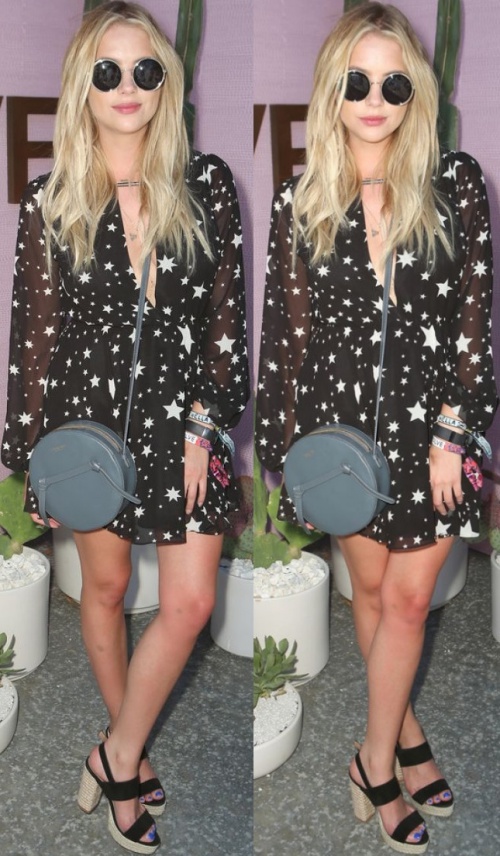 Vanessa Hudgens was certainly in her element at this year’s Coachella festival. She was spotted wearing a white bralette under white distressed denim overalls from Forever 21. Wrapped around her waist is a Jacquie Aiche x Mother denim shirt, and her feet were clad in a pair of brown suede boots from Aquatalia. Her accessories include a choker from Taylor Morgan, gold earrings from Adornmonde, and an arrowhead necklace from Jacquie Aiche. 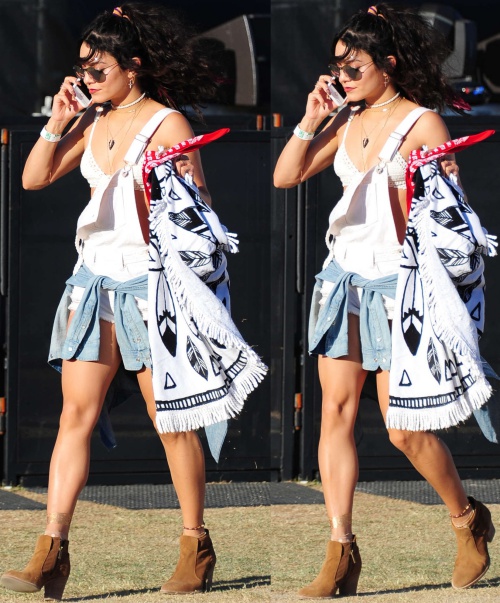 Katy Perry showed up with Orlando Bloom on Day 3 of the Coachella Festival. She was seen wearing a red playsuit from Isabel Marant, which she styled with embellished leather sandals from Valentino. 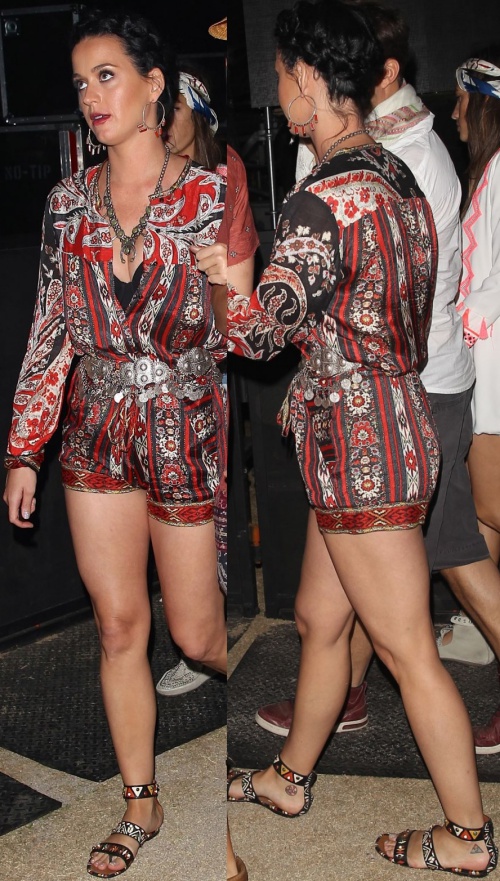 Taylor Swift made an appearance on Day 2 of the Coachella Valley Music and Arts Festival in a surprisingly casual and laid-back ensemble. She wore a grey shirttail tee from The Great, a short black skirt from Brandy Melville, a pair of V Star 2 sneakers from Golden Goose, and a gold star necklace from Versace. 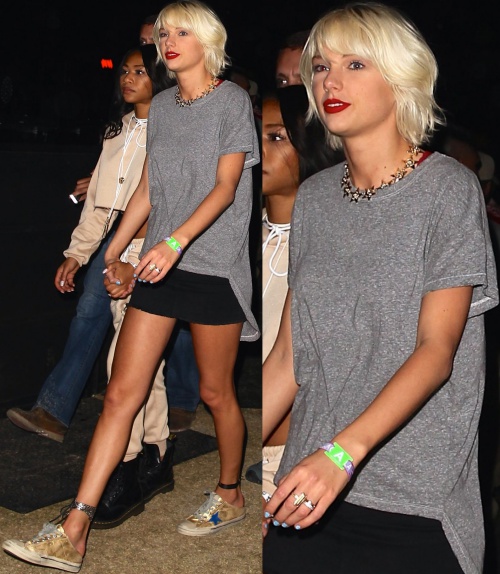 Kylie Jenner always experiments with her looks, and she showed up with multicolored hair at this year’s Coachella festival. Sporting pink-and-green braids, she was spotted wearing Tyga 2012 Careless World Tour shirt, denim shorts from RE/DONE, black Sk8-Hi sneakers from Vans, a diamond bracelet from Cartier, and a mini crossbody bag from Chanel. 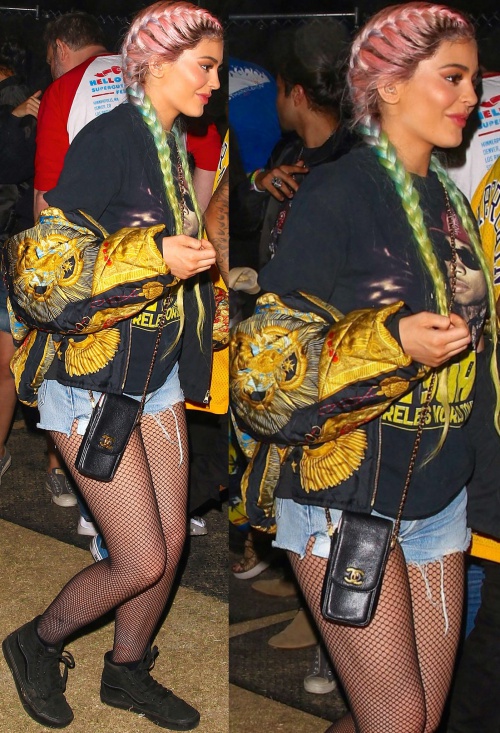 What do you think of these looks from the 2016 Coachella Valley Music and Arts Festival? 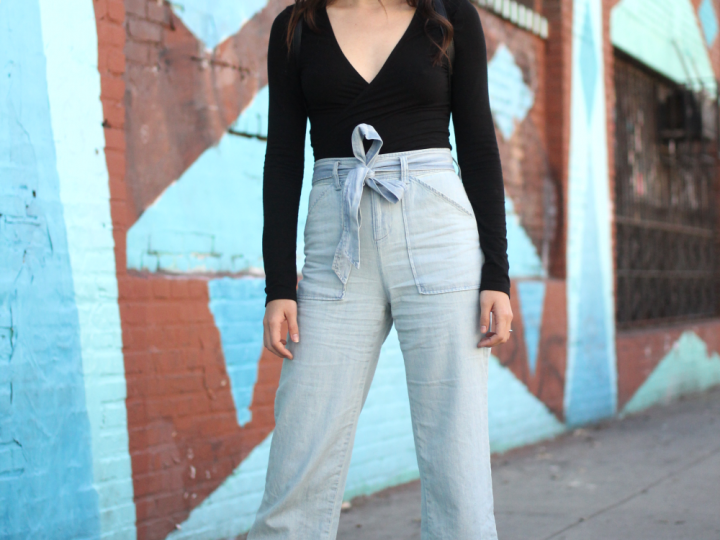 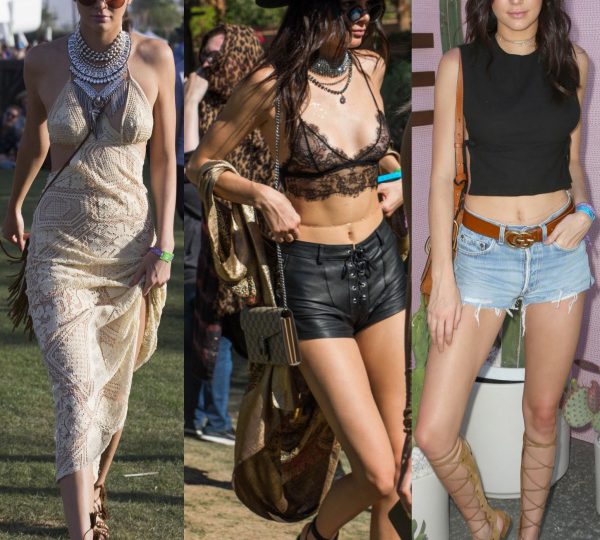