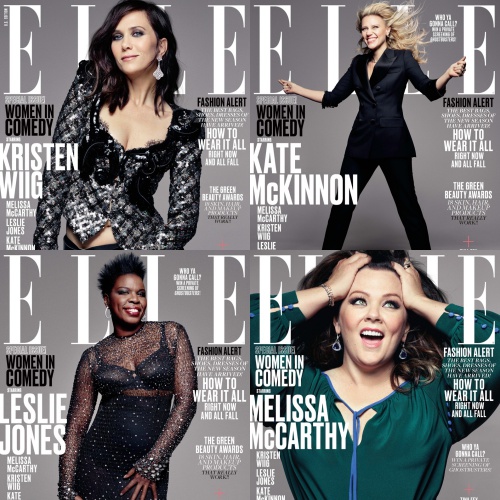 Scroll through the images below for a peek at the ultra-glam shoot featuring the cast of the Ghostbusters reboot: 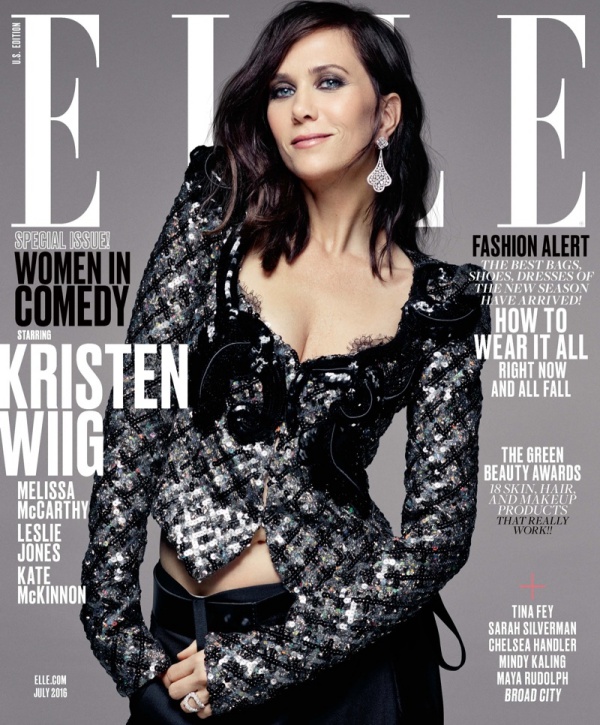 Kristen Wiig is wearing a jacket and a pair of trousers from Marc Jacobs, a bra from Morgan Lane, earrings from Chopard, and a ring from Ana Khouri. 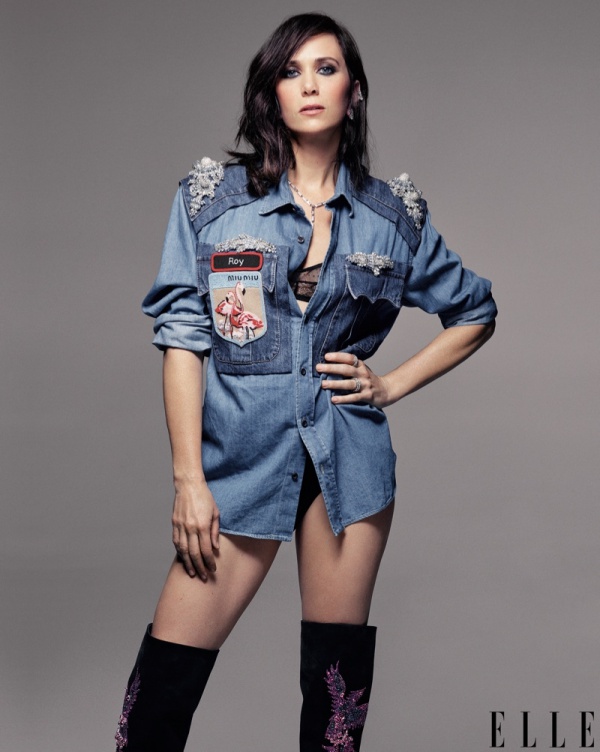 Kristen Wiig is wearing a shirt from Miu Miu, a bra from Araks, jewelry from Harry Winston, and boots from Giuseppe Zanotti Design.

“I was scared that I was going to freeze or swear or pass out.” – Kristen Wiig on being terrified on Saturday Night Live 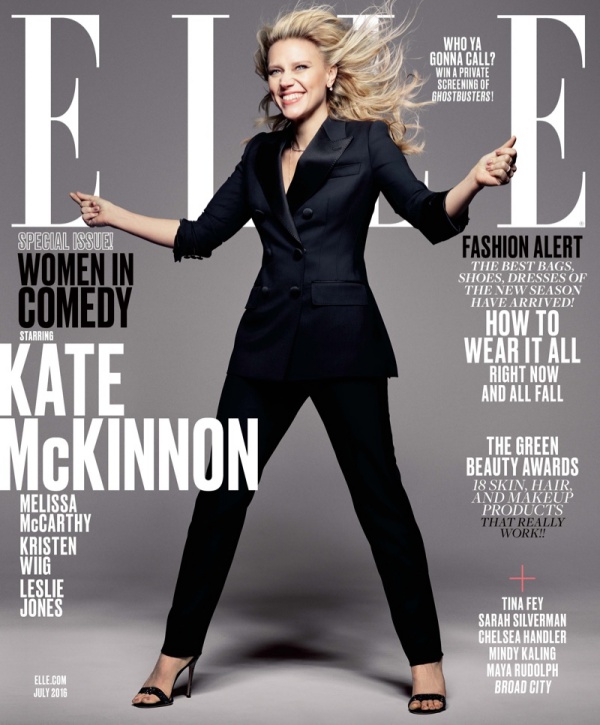 Kate McKinnon is wearing a blazer and a pair of trousers from Dolce & Gabbana, earrings from Nirav Modi, a choker from Anita Ko, necklace and rings from Cartier, and sandals from Gianvito Rossi. 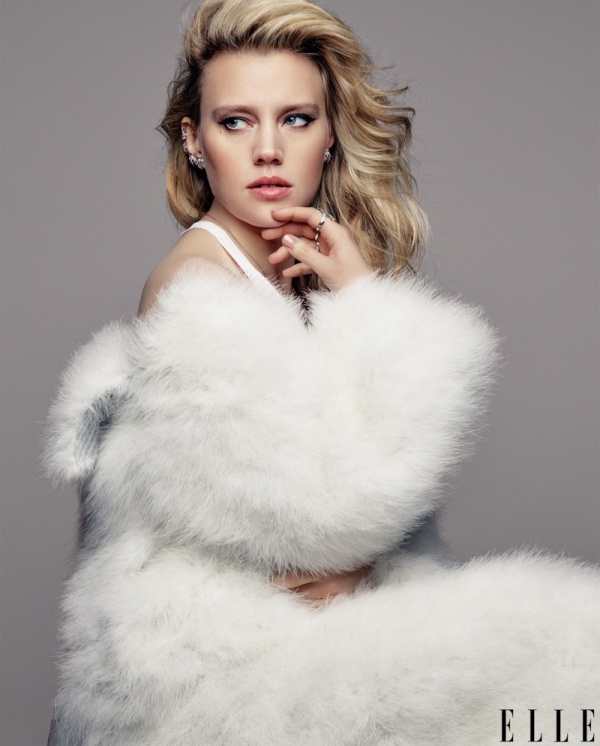 Kate McKinnon is wearing a coat from Calvin Klein Collection and earrings from Chanel Fine Jewelry. 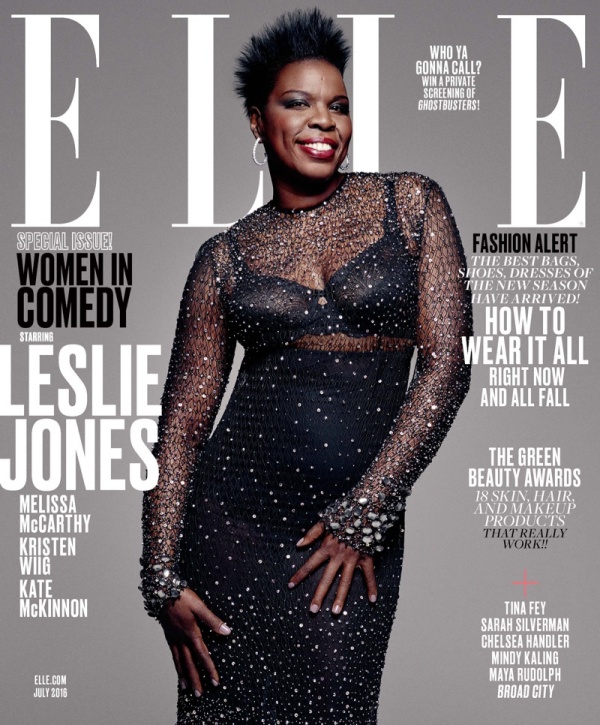 Leslie Jones is wearing a gown from Sophie Theallet, a bra from Triumph, earrings from Chopard, and sandals from Stuart Weitzman. 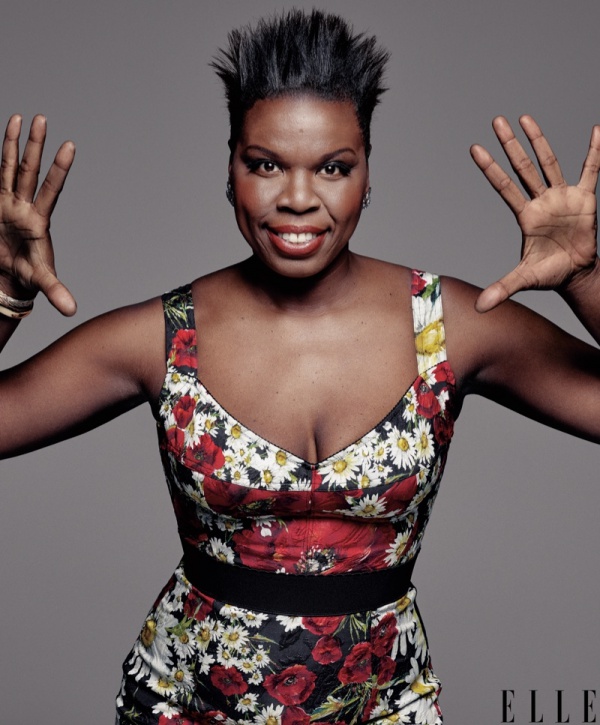 “I just knew that I was funny, and I knew that it was just a matter of time. I didn’t know what was going to actually happen – this is definitely way bigger than I thought – but I knew there was no way I was going to be that funny and nobody was going to notice it.” – Leslie Jones on being funny

Melissa McCarthy is wearing a blouse and a skirt from Prabal Gurung, earrings from Martin Katz, and bracelets from Kimberly McDonald. 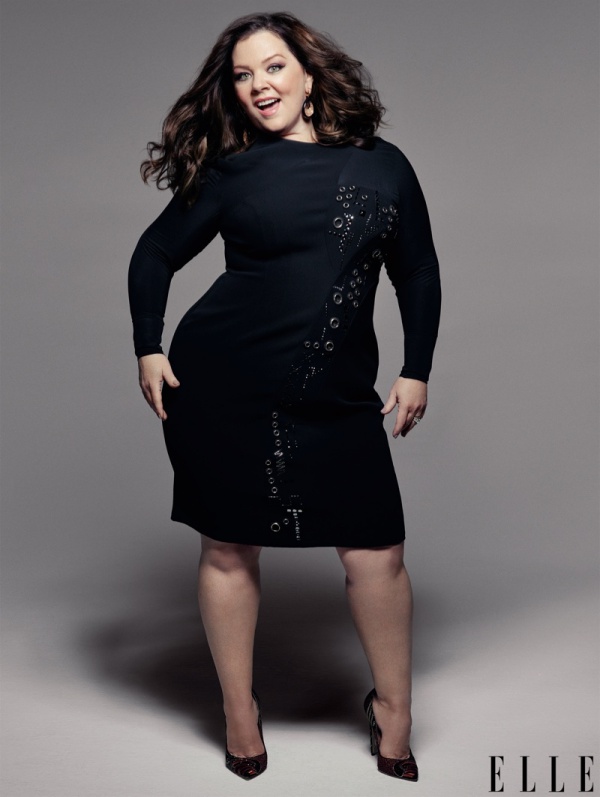 Melissa McCarthy is wearing a dress from Versace, earrings from De Grisogono, and pumps from Brian Atwood.

“I get so psychotically attached to all of my characters, and I fight for them in probably the most annoying way. I hear myself saying to Ben or Paul [Feig, Ghostbusters’ director], ‘She wouldn’t phrase it that way.’ I know it’s such an actory thing, but I feel it to my core: I have to represent the woman I’m getting to be. Even if she’s fictitious, she’s always real to me: three-dimensional, flawed, loving, screwed-up, as real women are.” – Melissa McCarthy on inhabiting her roles and fighting for the characters she plays

Elle magazine recently hosted a Women in Comedy event, where countless A-list stars from film and television gathered to celebrate the beautiful and talented women in the industry. The ladies of the all-new Ghostbusters movie were fabulously spotted as they stepped out to join in on the celebration. Melissa McCarthy brought a pop of color to the event, while Kristen Wiig embraced the pajama trend.

Melissa McCarthy was a vision in her pink dress with long bell sleeves from Judy B. Swartz. She styled it with tousled waves, a nude clutch, and a pair of floral pumps. 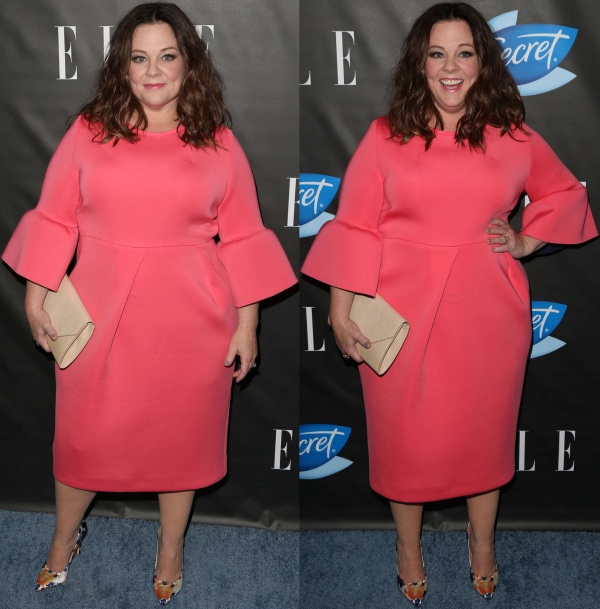 Kristen Wiig showed up in a printed pajama-style ensemble from Monique Lhuillier’s fall 2016 collection. Her outfit features blue-and-pink silk, embellishments on the collar and shoulders of the pajama blouse, and matching high-waisted pants. Minimal hair and makeup, a slightly tousled hairstyle, and jewelry from Rebecca Designs and Graziela Gems finished off her look. 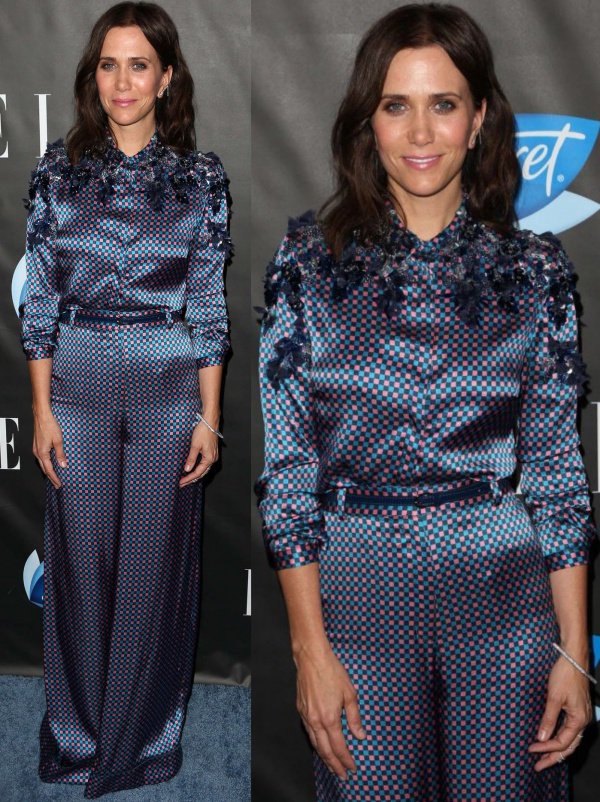 What do you think of Elle magazine’s July 2016 covers featuring the all-female cast of the Ghostbusters reboot? 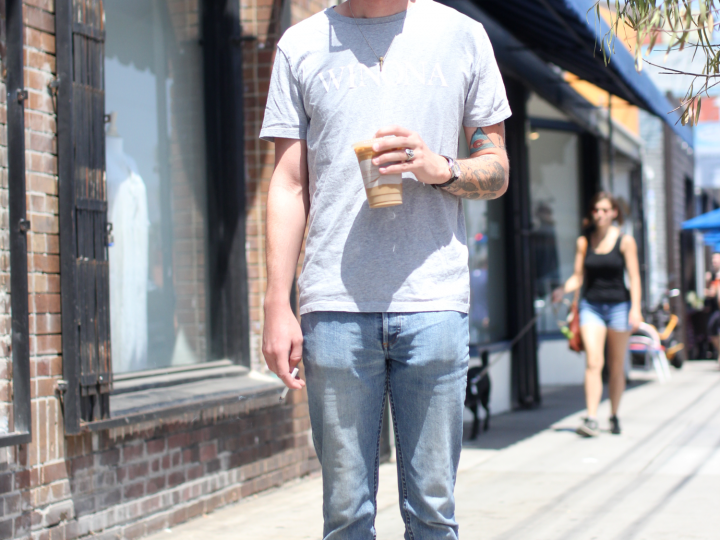