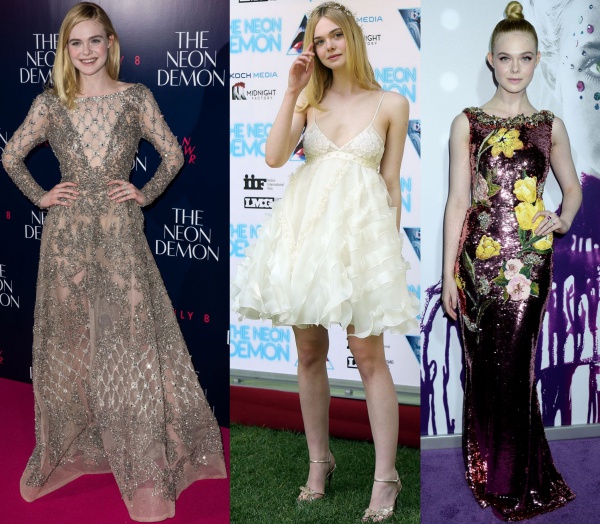 Elle Fanning has been serving a number of stylish looks while on a promotional tour for her latest film, The Neon Demon. Last month, she attended the Cannes Film Festival in two stunning looks that showed off her style prowess. She exuded her natural girlish charm in a Chanel lace dress during a photocall, and turned heads in a Zuhair Murad tulle dress during the premiere.

For this movie press tour, it seems that Elle tends to go for flirty dresses during photocalls and embellished gowns for premieres.

After making an appearance at this year’s Cannes Film Festival, she showed up in London in a nude couture gown from Elie Saab. Earlier this month, she donned a pretty ruffle dress from Giamba at a photocall in Rome. Most recently, she graced the LA premiere in a sequined gown from Dolce & Gabbana.

Scroll through the images below to see her most recent red carpet looks while on a press tour for The Neon Demon:

For the London premiere, Elle wore a sheer embellished gown from Elie Saab’s spring 2016 couture collection. It featured a bateau neckline, long sleeves, an open back, and a floor-length skirt. She styled it with jewelry from Tiffany & Co. and shoes from Christian Louboutin. 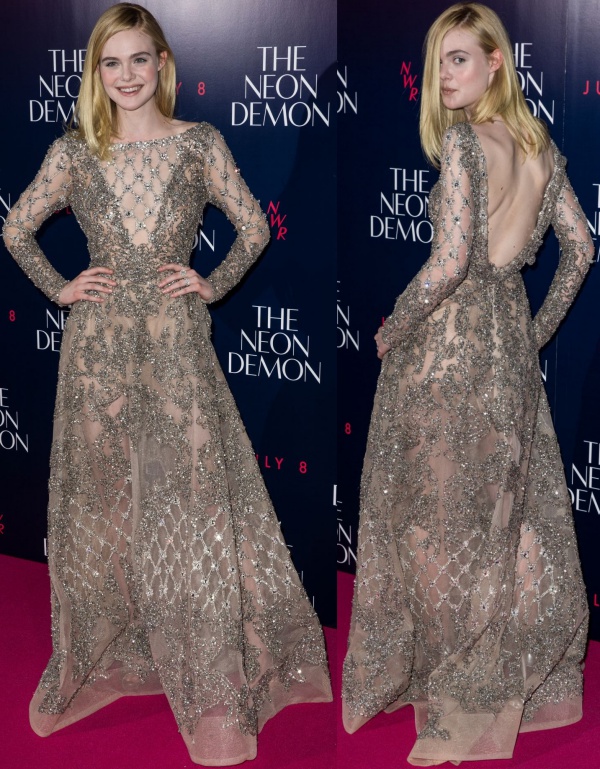 Elle Fanning at the premiere of The Neon Demon held at Picturehouse Central in London, England

The 18-year-old star attended a photocall in Rome while wearing a white ruffle dress from Giamba’s fall 2016 collection. It featured a sleeveless design, thin shoulder straps, a low neckline, a voluminous skirt, and floral embroidery. She finished off her look with a Twigs & Honey hair vine and crystal-embroidered sandals from Christian Louboutin. 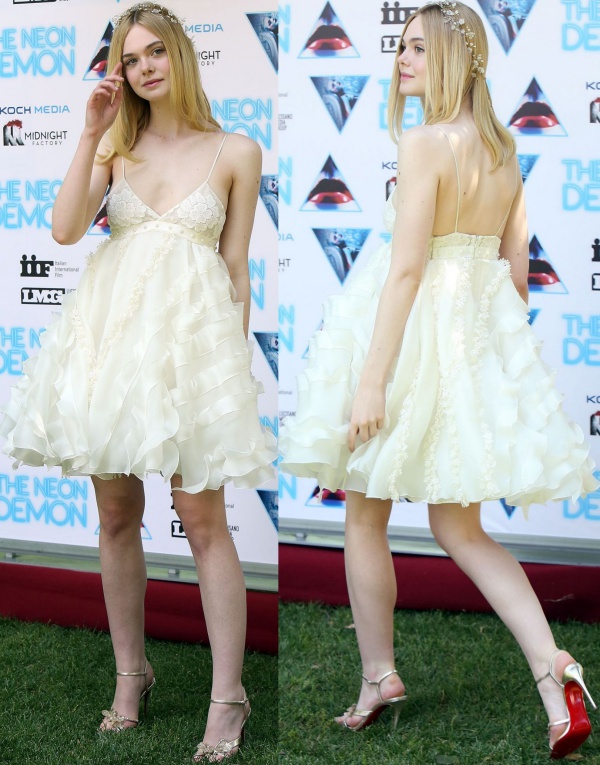 Elle Fanning at the photocall for The Neon Demon in Rome, Italy

Finally, Elle made a sparkly entrance in a maroon sequined gown from Dolce & Gabbana during the LA premiere. Her dress featured a sleeveless design, a boat neckline, a floor-length skirt, and contrasting yellow and pink flowers. She styled it with a sleek topknot, glittery eye makeup, pink lips, and colorful rings from Tiffany & Co. 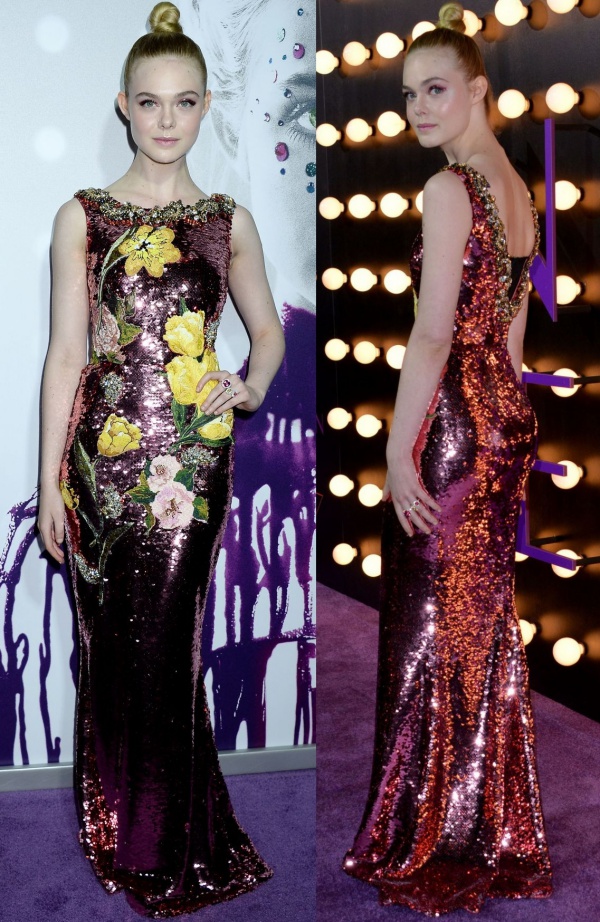 Elle Fanning at the premiere of The Neon Demon held at ArcLight Hollywood in Los Angeles, California

What do you think of the latest red carpet looks from Elle Fanning? Which one’s your favorite? 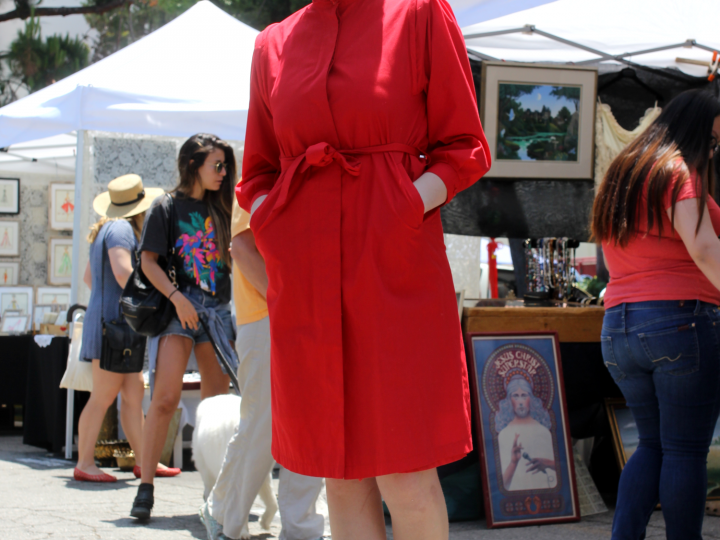 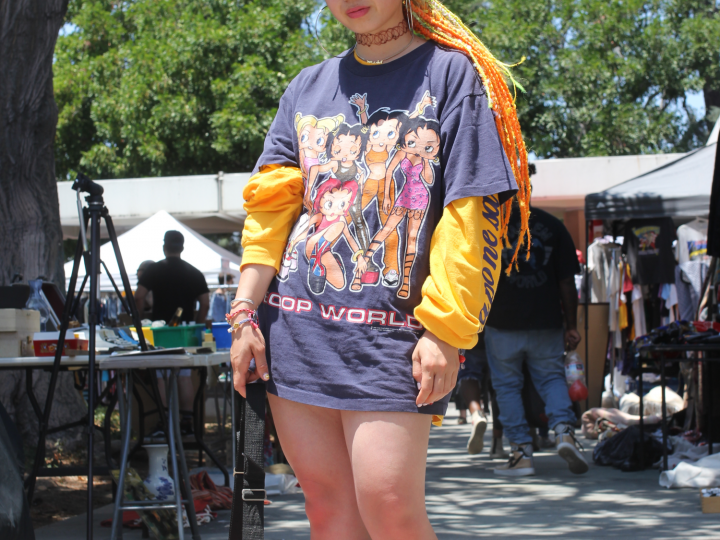